How Does Drug Testing Work?

You might ask yourself, how does drug testing work, hopefully this article can answer the question for you.

Most urine and oral fluid drug testing is usually broken down into two stages. The initial screening stage (qualifiable result) and the confirmation stage (quantifiable result).

The screening stage can be done in one of two ways:

One of the key concepts within drug testing is the application of a cut-off level. This is the point which segregates a test result as being either positive (+ve) or negative (-ve). 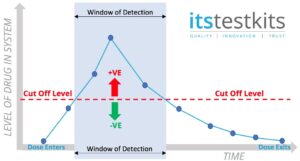 For drug screening tests, a cut-off level is chosen that will optimise drug detection but minimise the number of “false positive” results. This is why the following must be considered:

It should be noted that there are a large amount of inferior tests currently available on the market. These may publish high accuracy figures, but are unable to reproduce those claims across large scale manufacture.

How to interpret results

It is important to note that a negative sample doesn’t mean that it is drug free. For example, it might contain a drug at a concentration that is lower than the defined cut-off.

If a drug test is reported as a screen positive (also known as a “non-negative” or “presumptive positive”), this merely shows a response. This is usually because a drug, or it’s metabolite, is present. It cannot show how much drug was taken, how potent the drug was or be correlated to any degree of impairment. As this is a screening tool, all screen positive drug tests require a confirmation test if they are to be legally defensible.

Any drug test screen result (QUALIFIABLE), whether from a Point of Care device or from a Laboratory is never 100% accurate. It can therefore only be reported as Negative or Non-Negative. There are no legally defensible QUANTIFIABLE (i.e. figures) results available at this stage. If a Negative result is obtained, then a “PASS” is usually reported (unless foul play / adulteration / dilution etc is suspected). Correct training for Collection Officers and the use of a Sample Validity Test such as urine adulteration test strips can assist with this.

All Non-Negative results require confirmation analysis, which can only be done at the Laboratory. The laboratory will then issue a QUANTIFIABLE result. E.g. 26 ng/ml.

Can I just use the screen result?

Some employers or organisations, in an attempt to cut costs, will only use drug test screen results. They do not send Non-Negative samples to the laboratory for confirmation analysis. This will not give them a fully legally defensible result and therefore is not recommended. Results can be successfully challenged, if a policy is not sufficient or followed to provide legally defensible result.

It is important to understand that during the both the screen and confirmation stage, the drug test is not just looking for actual drugs in the samples. They are often looking for drug metabolites. Once the body takes in a substance, the end product looks much different, once it passes through.

Basically speaking, drugs go into the body in the “psychedelic” form and can come out as a metabolite and/or also as the “parent drug”. The detection of a metabolite indicates that the drug has actually been consumed by the person. 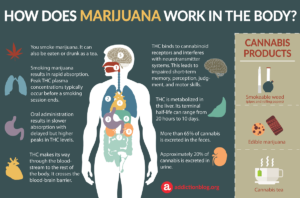 For example, the psychoactive ingredient in cannabis/marijuana is THC (delta 9 tetrahydrocannabinol). This is oxidized by the body and comes out as many different metabolites. One of the most prevalent forms is Tetrahydrocannabinol-11-carboxylic acid (THC-COOH).

Cannabis passes from the lungs to the blood stream, and while the drug is freely floating in the body in sufficient quantity, a “high” is felt. Cannabis is liposoluble, meaning it absorbs into fat cells. Fat cells store the drug indefinitely until the body burns the fat cells for energy. When the cell is burned, the drug is metabolized and released back into the blood stream. This is why cannabis can sometimes be detected in urine for up to 30 days after chronic and frequent long term usage.

What cut-offs are used?

Many Point of Care drug test devices/kits are made for the mass USA market and use higher cut-offs. They can also test for drugs that are less relevant to the UK. Using higher cut-offs may mean that you will not detect a larger quantity of positive samples at the lower end. This will make your testing program less effective.

If testing in Europe, to European standards, then you should look for a “Point of Care” drug test device/kit that has test strip cut-offs aligned to the European Workplace Drug Testing Society (EWDTS) laboratory screening standards where possible. The ITS range of Point of Care urine drug testing devices/kits and oral fluid drug testing devices/kits are manufactured with that in mind and specifically for the UK and Ireland market.

The EWDTS (European Workplace Drug Testing Society) guidelines’ cut off for cannabis at the urine screen stage is 50 ng/ml (POC or via Lab screen). This is a composite of all cannabis metabolite concentrations. If the sample is below this level then the test is complete and classed as a NEGATIVE and therefore a PASS result.

If the sample is over 50 ng/ml, then the sample is sent on to a laboratory for confirmation analysis. The cut-off for the confirmation stage is set lower at 15 ng/ml because the laboratory specifically looks for one of the many metabolites. This metabolite is Tetrahydrocannabinol-11-carboxylic acid (THC-COOH). It can also be referred to as 11-nor-9-Carboxy-THC, also known as 11-nor-9-carboxy-delta-9-tetrahydrocannabinol, 11-nor-9-carboxy-delta-9-THC, 11-COOH-THC, THC-COOH, and THC-11-oic acid.

At this point, you can then act upon this result (e.g. disciplinary) as it is now a legally defensible and QUANTIFIABLE result unlike the screen QUALIFIABLE result of just “Non-Negative”.

The SCREEN (QUALIFIABLE) result with the higher general cut-offs used, are only to be used as a guide/risk assessment to whether a sample requires further CONFIRMATION (QUANTIFIABLE) analysis using the lower and more specific cut-offs.

Cut-offs are never normally set to 0ng/ml (zero) for workplace drug testing or general drug testing (not including forensic testing). This is to rule out external contamination such as passive smoking, exposure rather than actual consumption etc.

It is advisable to include a section on this within your Drug and Alcohol Policy.

For more information on how drug testing works Contact Us

What drugs are students taking during the pandemic?

What drugs are students taking, national lockdowns are not holding students back from using drugs according to The Tab's 2020 Drugs Survey. It was answered by 16,017 students across 14 different universities including Bristol, Sheffield, Exeter...

It’s now illegal to try to pass a drug test by sample adulteration... We often see and detect / help our customers detect employees trying to tamper with their urine samples to pass a drug test. Indeed there is a whole industry dedicated to “how to pass your drug test”. We cover it in our training programs and we...

Increase in Alcohol Consumption During Covid-19

The UK has seen an increase in alcohol consumption during COVID-19, the biggest increase was during the summer furlough period. However, we are now in lockdown 3.0 & chances are, for some, drinking will now be at problem levels. Many people use alcohol to ...